In this post, we will clear up any confusion between malleable iron and cast iron and go through the different materials that fall under the cast iron umbrella. We will explain what sets malleable iron apart and what applications best suit each material. Let's take a look.

What is Cast Iron?

Cast iron is the result of smelting ore in a furnace, creating pig iron that has a high carbon content. Alloys are then added to the iron which is poured into molds and allowed to cool.

Due to their extreme brittleness, cast iron fittings should never be used in plumbing applications. Understanding the difference is key to ensure you are selecting the correct material fitting for your application. Below, we have four materials that fall under cast iron, grey, white, malleable and ductile.

White cast iron was used in both cast iron and malleable iron fittings. White cast iron has a presence of cement that gives off a white surface, hence the name. White cast iron is too brittle for many structural applications but with it's good hardness and abrasion resistance, it can be used in many applications including teeth of a backhoe's digging bucket and lifter bars in ball mills. This material is also relatively low cost.

Malleable iron starts out as white iron casting but is then treated at a heat of roughly 1,650°F, 900°C. Malleable iron contains more blunt boundaries opposed to flakes, which eliminates the stress concentration problems that grey cast iron can cause. Malleable iron has properties that are very similar to mild steel.

Ductile cast iron is a more recent development. Small amounts of magnesium is added. Ductile iron is very similar to malleable iron, but parts can be cast larger compared to malleable iron where there is a limit of how large the part sections can be cast. Blue, electrostatic epoxy paint is added to items like pitless spools, well seals and well caps for corrosion resistance.

What is Malleable Iron? 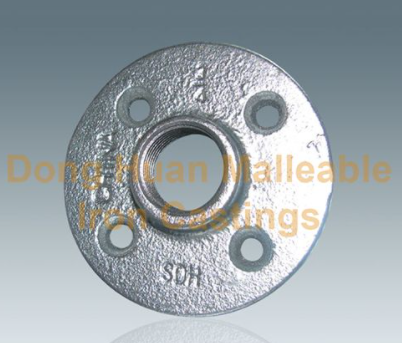 Round Flange with 4 Bolt Holes

Malleable iron starts out as cast iron, but an annealing heat treatment is applied to the cast iron to make it more workable and increase ductility. Consequently, malleable iron has a much lower carbon content than cast iron. There are three different types of malleable iron:

To make malleable iron, foundry workers add hematite ore during the annealing process. Depending on the need for ductility, they may also add sodium, cerium, or magnesium.

Cast iron is typically smelted in a bloomery. Usually, the furnace becomes too hot for other types of iron making and this is when the iron absorbs the most carbon. It is then poured into molds for cooling.

Malleable iron is easier to work with to make more intricate designs, such as Malleable Iron Pipe Fittings. On the other hand, cast iron is better known for its castability, meaning it is easily poured into molds without premature cooling because of its low melting point.

The annealing process of malleable iron causes it to form small particles of carbon that are shaped irregularly. This gives the iron more strength while allowing it to keep ductility. Malleable iron is relatively easy to machine, and it is shock resistant.

Cast iron contains about two percent carbon, which makes it stronger and more resistant to rusting. But this also makes it more difficult to machine because it is difficult to get a smooth surface with the material. This can also make cast iron more costly to work with as it reduces tool life.

Both cast iron and malleable iron are similarly priced. However, cast iron tends to be cheaper because it has a low melting point requiring less energy to heat it.

Cast iron is used to make castings such as barbell weights in a gym or engine blocks.

From the manufacturer of Malleable Iron Pipe Fittings in China

Shijiazhuang Donghuan Malleable Iron Castings Co., Ltd. manufactures pipe joints of various wall thicknesses and materials for many industries.  Our factory cooperates with many well-known companies. We are professional manufacturer of Malleable iron pipe fittings in China,with more over 30 years in this field. Competitive price, best quality, abundant stock and fast delivery are our great advantage. Hope that we may build business cooperation in the future.

Previous: 4 Cases in Which You Should Use Bolt Clamps in Your Piping System

Next: What Should You Know When Specifying Quick Couplings?