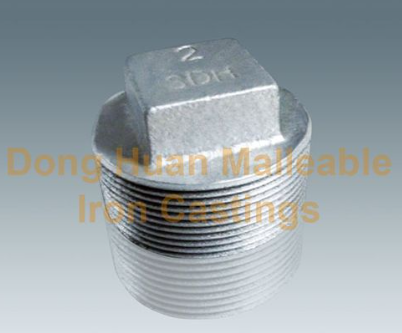 Malleable cast iron is white cast iron that has been annealed. Through an annealing heat treatment, the brittle structure as first cast is transformed into the malleable form. Therefore, its composition is very similar to that of white cast iron, with slightly higher amounts of carbon and silicon. Malleable iron contains graphite nodules that are not truly spherical as they are in ductile iron, because they are formed as a result of heat treatment rather than forming during cooling from the melt. Malleable iron is made by first casting a white iron so that flakes of graphite are avoided and all the undissolved carbon is in the form of iron carbide. Malleable iron starts as a white iron casting that is then heat treated for a day or two at about 950 °C (1,740 °F) and then cooled over a day or two. As a result, the carbon in iron carbide transforms into graphite nodules surrounded by a ferrite or pearlite matrix, depending on cooling rate. The slow process allows the surface tension to form the graphite nodules rather than flakes. . Malleable iron, like ductile iron, possesses considerable ductility and toughness because of its combination of nodular graphite and low carbon metallic matrix. Like ductile iron, malleable iron also exhibits high resistance to corrosion, excellent machinability. The good damping capacity and fatigue strength of malleable iron are also useful for long service in highly stressed parts. There are two types of ferritic malleable iron: blackheart and whiteheart.

Material properties are intensive properties, that means they are independent of the amount of mass and may vary from place to place within the system at any moment. The basis of materials science involves studying the structure of materials, and relating them to their properties (mechanical, electrical etc.). Once a materials scientist knows about this structure-property correlation, they can then go on to study the relative performance of a material in a given application. The major determinants of the structure of a material and thus of its properties are its constituent chemical elements and the way in which it has been processed into its final form.

Materials are frequently chosen for various applications because they have desirable combinations of mechanical characteristics. For structural applications, material properties are crucial and engineers must take them into account.

The ultimate tensile strength is the maximum on the engineering stress-strain curve. This corresponds to the maximum stress that can be sustained by a structure in tension. Ultimate tensile strength is often shortened to “tensile strength” or even to “the ultimate.”  If this stress is applied and maintained, fracture will result. Often, this value is significantly more than the yield stress (as much as 50 to 60 percent more than the yield for some types of metals). When a ductile material reaches its ultimate strength, it experiences necking where the cross-sectional area reduces locally. The stress-strain curve contains no higher stress than the ultimate strength. Even though deformations can continue to increase, the stress usually decreases after the ultimate strength has been achieved. It is an intensive property; therefore its value does not depend on the size of the test specimen. However, it is dependent on other factors, such as the preparation of the specimen, the presence or otherwise of surface defects, and the temperature of the test environment and material. Ultimate tensile strengths vary from 50 MPa for an aluminum to as high as 3000 MPa for very high-strength steels.

The Young’s modulus of elasticity is the elastic modulus for tensile and compressive stress in the linear elasticity regime of a uniaxial deformation and is usually assessed by tensile tests. Up to a limiting stress, a body will be able to recover its dimensions on removal of the load. The applied stresses cause the atoms in a crystal to move from their equilibrium position. All the atoms are displaced the same amount and still maintain their relative geometry. When the stresses are removed, all the atoms return to their original positions and no permanent deformation occurs. According to the Hooke’s law, the stress is proportional to the strain (in the elastic region), and the slope is Young’s modulus. Young’s modulus is equal to the longitudinal stress divided by the strain.

From the manufacturer of Malleable Iron Pipe Fittings in China

Shijiazhuang Donghuan Malleable Iron Castings Co., Ltd. manufactures pipe joints of various wall thicknesses and materials for many industries.  Our factory cooperates with many well-known companies. We are professional manufacturer of Malleable iron pipe fittings in China,with more over 30 years in this field. Competitive price, best quality, abundant stock and fast delivery are our great advantage. Hope that we may build business cooperation in the future.

Next: 4 Cases in Which You Should Use Bolt Clamps in Your Piping System